Where to Find Treasure

Where to Find Treasure

Understanding where to start when looking for treasure is the first step in finding treasure.  First it is important to remember that you can find treasure pretty much anywhere and often in places you may least expect it.  So, there is no one answer to where to find something.  However, being keen to historical events (both human and geologic) is a good place to start.

Relics, coins, jewelry, and such can be found anywhere people have ever been.  The age of those items will greatly depend on at what time period they were inhabited.  Obviously the older the site, the older the items you will find.  However, don't be surprised if someday you stumble upon a really old find somewhere you didn't expect it.  Say, like your friend's back yard!  It happens.

Likewise, don't be surprised if you find modern trash (such as a beer can or pull tab) in an old historical site.  People are always moving things around, messy, and either careless or they always seem to be misplacing things.  Really it is wide open where you may find treasure.  But, you would be amazed if you realized how much of it is hidden right under our noses!

It is a good idea to have a basic knowledge of the history of any property you are treasure hunting on. In my blog "Where to Metal Detect," I discuss more of this important aspect of treasure. This is relevant when looking for human treasure.  But when looking for nature's treasure it can be a whole different story.

Kansas Gold - Gold is scarce in Kansas.  Although, at one time it is said that Cortez and his posse had visited the area under suspicion it may be home to the Lost City of Quivira (one of the 7 Cities of Gold).  Gold is pretty much everywhere.  Whether it is enough to expend the efforts to recover is the real qustions.  There are a few reports of small fine gold in Northern Kansas and I have personally found some VERY small "flour gold" in Kansas and some larger flakes in Missouri.  Most likely this gold is a result of glaciers several thousands of years ago which deposited gold along glacial lines.  These alluvial plains can hold trace amounts of placer (pronounced "plasser") gold that can be found by the determined prospector.  Some small "picker" sized pieces can be found sporatically.  Click the link below for a video of gold finds from Kansas or Missouri.

Kansas Relics - Relics can be found all over Kansas.  Kansas' place in history dates back far beyond its becoming a state. As far back as the Stone Age Paleo-Indian and Archaic Peoples were said to have hunted the plains for mammoth and other large game.  The State has a rich history which is dated back to the 16th century when it was visited during the Spanish Conquest of Mexico.  At that time the area was inhabited by Native American Indians who hunted bison and later traded with the French fur trappers.  It was open to settlement in the 1850's and was an intregal site for what was to become the Civil War.  The first battle leading to the war occured in Kansas.

Famous law men like Wyatt Erp and Doc Holiday as well as famous outlaws like Jesse James and Billy The Kid either lived or frequented the Kansas and the Kansas City area.  It is said that Jesse James had stashed hoards of stolen money, gold, and silver throughout the Midwest region.  It is said to be both buried and hidden in caves and caverns.

There are lots of old homesteads and ghost towns in Kansas .  But there may be many more forgotten ghots towns and homesteads you can no longer even see.  The seasoned treasure hunter knows that and does reseach and talks to locals to find good hunting ground.  With today's metal detectors and technology, you can be assured that you can go to nearly any old homestead and find some sort of treasure metal detecting.  Things such as coins, jewelry, caches, and even gold can be found in nearly any State.  Check out this video of prospecting around an old farm house where we find a cache of old copper and silver coins:

Check this video out of a couple old homestead we metal detected.  This day we only found relics and trash, but we will eventually go back and find some goodies!

Nevada gold production down, value up 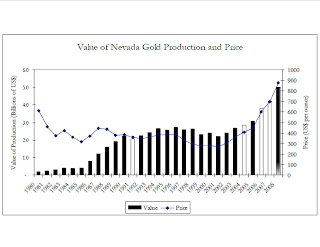 The Nevada Mining Institute has just released the economic analysis of the Nevada mining industry for 2008. Gold production, which accounts for more than 80% of mining value in the state, dropped from 6.04 million ounces the year before to 5.7 million ounces, but the overall value was up to over $7 billion due to rising prices. [right, Value of Nevada gold production and price. Credit, Nevada Mining Association]

There are many good books written on treasure hunting. One of my favorite books on finding treasure is, The Urban Treasure Hunter: A Practical Handbook for Beginners by Michael Chaplan.  This paper back book is under $20 and gives you a fundamental understanding of the tools and methods of hunting a variety of treasures.  It is packed with information that will help beginners get started.

Another good book I own is Relic Quest, by Stephen Moore and available through authorized Garrett dealers.  It appears to be mostly based off information obtained through the Author and Charles Garrett, founder of Garrett Metal Detectors as well as the great many other Garrett users.  Again, it is based off finding items with a metal detector.  It has over a thousand color pictures of relics, coins, and amazing detector finds. Definitely a good read as well as a good coffee table book.

The best gold prospecting book is by far the Gold Prospectors Association of America's Mining Guide.  It is available through the G.P.A.A. when you register as a member.  Membership is relatively inexpensive (about $85 at the time of this writing) and will pay for itself the first time you visit a claim (and it comes with gold pans and a bunch of other goodies). Plus, the additional knowledge within it is priceless.  All proceeds go towards helping preserve the rights we have prospecting for gold and treasure.  I HIGHLY recommend joining.  It provides many excellent benefits.